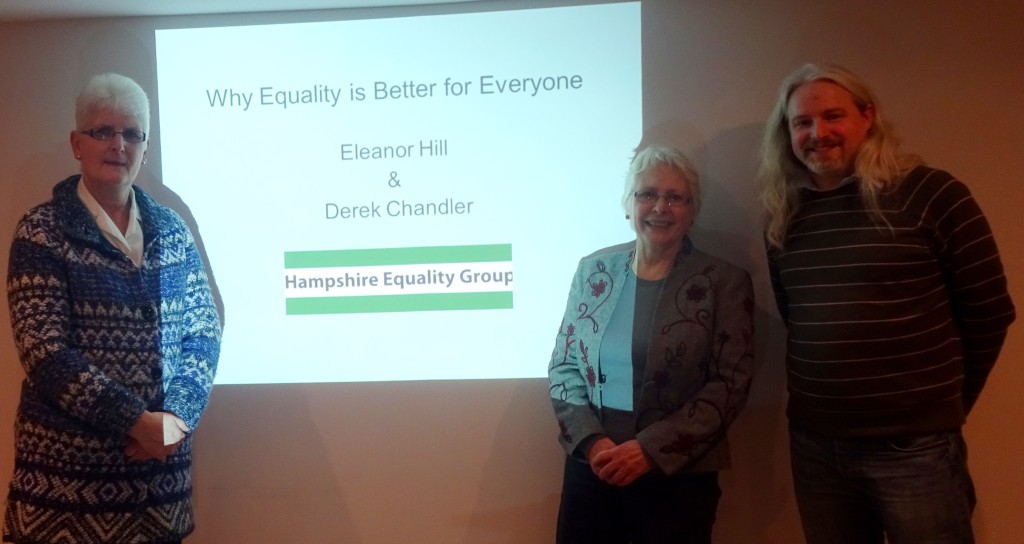 In 2009 Richard Wilkinson and Kate Pickett published the influential book “The Spirit Level” showing the correlation between extreme inequality and the increases in so many social ills. Since then inequality has grown still more until now the richest 1% in the UK own nearly half of the wealth.

Talk write up: “Eleanor Hill and Derek Chandler (pictured on the right) from the Hampshire Equality Group gave a talk to Farnham Humanists (new Chair Ailsa Davies pictured on the left) which looked at the evidence and challenged the status quo.

So how unequal are we and how has it changed? Eleanor used her personal earnings as a systems analyst to illustrate the point. She has recently seen her 1981 job advertised at roughly the same salary after allowing for inflation. In contrast, her company’s Chief Executive Officer’s (CEO) current salary is roughly 10 times more than the CEO earnt in 1981 after allowing for inflation (the 1981 £100,000 CEO salary would be £380,000 today not what it is at £3,500,000!) Putting it another way, in 2015 it would take a cleaner 375 years on the minimum wage to earn what a FTSE CEO earns in a year.

The big question is does inequality matter?  “The Spirit Level” shows in a developed country, inequality not wealth is the cause of health, social problems and life expectancy. The book has generated some controversy with right of centre Peter Saunders disputing its statistics and Hugh Noble accusing all of “cherry picking” the data to suit desired conclusions.

So what about Farnham? Whereas the average asking price for a property locally is £650,000, shockingly 8% of Farnham children live below the standard relative poverty line of less than £250 a week net disposable income. Farnham Food bank was expected to help 1400 people last December.

How have we got here? Using Institute of Fiscal studies data, Eleanor argued how inequality soared in the 1980s, partly due to City de-regulation “Big Bang”, unemployment and the move to a service economy. Property prices are going through the roof especially in London. In 1970 10% of financial transactions were speculative and not in the real economy, today over 90% are speculative. The overpaid use their additional wealth to drive up the price of non-productive assets like land and housing. Very little gets ploughed back into the economy to create even the tiniest trickle down. The OECD, IMF and Archbishop of Canterbury all argue that a more equal society is a more efficient society.

What can we do about it? Eleanor and Derek’s ideas included: tackle tax havens, close tax loopholes, “Name and Shame” companies like Starbucks, tax international financial transactions, tax use resources rather than incomes and profits, and pay the living wage.  London’s Mayor Boris Johnson says “Paying the London Living Wage is not only morally right, but makes good business sense too”.

A more radical option is to adopt a universal income with citizenship as the only basis for entitlement (see The Citizen’s Income Trust and the Basics Income Earth Network). Related experiments have been tried in Canada in the 1970s (Mincome) and Namibia in 2008/2009.

Eleanor ended her talk with a plea for more people to become actively involved in the political process citing Denmark where equality is much higher and 89% voted in their last general election.” [Jennie Johnson]

about Tax Havens – you can find a write up of that talk HERE together with John’s presentation.